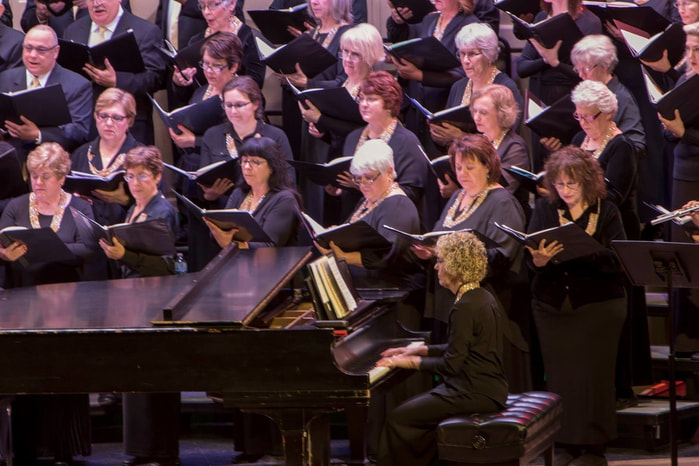 photo by George Puglisi
Almost 700 people packed the Oneida High School Auditorium on Sunday, December 4, to kick off their holiday season with us.  The near-capacity audience was enthusiastic and seemed to enjoy each number.  They were able to get into the act during the audience "sing-along"...wow!  800 voices made a glorious sound indeed!  Another highlight of the concert came when Chorale alumni were invited to take the stage and join in singing the "Hallelujah Chorus".  About 30 former Chorale members participated...that was another thrill for all.  The songs performed at the concert had been voted on by community and Chorale members last spring.  The number one vote-getter was performed as the concert's finale...and the winner was...the time-honored favorite, "Do You Hear What I Hear".  The Chorale thanks ALL who attended for their interest and support of live choral music!​
PRESS RELEASE - People's Choice Holiday Concert
The Oneida Area Civic Chorale, a 105-voice community chorus based in Oneida, will present the “People’s Choice Holiday Concert” on Sunday, December 4, 2016 at 4:00 PM at Oneida High School.   The concert will be directed by Kimberly Nethaway of Rome, with piano accompaniment by Heather O’Connell of Oneida and Bernadette VanValkenburg of Sherrill.  Deette Bunn of Jamesville will join the Chorale on harp and Amanda Yeoman of Oneida will play flute on selected numbers. The program will feature holiday selections from past Chorale concerts as voted on by community members and singers.

The “People’s Choice” concert kicks off the 50th Anniversary Season of the OACC. In an effort to thank the audiences who have supported the group since 1967, ballots containing the titles of songs taken from past performances were provided to concert-goers and Chorale singers last spring.  The top 15 vote-getters from the ballots were incorporated into the program for the Holiday Concert.

Concert selections chosen by “the people” include beloved holiday favorites “White Christmas” by Irving Berlin, “Do You Hear What I Hear”, by Noel Regney and Gloria Shayne, and  “Silent Night”, by Joseph Mohr and Franz Gruber, which features a solo by OACC soprano Sarah Anderson of Rome.  Tenor Don Drake of West Winfield will solo on “Have Yourself a Merry Little Christmas”, by Hugh Martin and Ralph Blane.  The women of the Chorale will perform “In the Bleak Midwinter”, by Christina Rossetti and Gustav Holst, with harp accompaniment, and the men will present “O Holy Night”, arranged by Scott M. Hyslop, featuring a solo by Steve Fisher of Canastota.  The entire group will present  “Gotta Whisper, Gotta Shout!”, by Victor C. Johnson, featuring a solo by Sarah King of Oneida.

Another “50th Anniversary Special” during the concert will be an invitation for all former OACC singers who are in the audience to join the Chorale on stage to present Handel’s “Hallelujah Chorus”.  Scores will be provided to singers when they reach the stage.

Chorale singer Amanda Yeoman, of Oneida, will once again share her talent on the flute  during the concert.  Yeoman is a graduate of the Crane School of Music and earned a Master’s Degree in Music Education from Syracuse University.  She currently teaches elementary general music and woodwind lessons in the Morrisville-Eaton School District and also directs the Choir and Praise Team at the Oneida First Presbyterian Church.  Yeoman will join the Chorale on flute on “What Child is This”, arranged by Dale Warland, and “Too Much Light for Midnight”, a piece by Alfred V. Fedak which was commissioned by the OACC in 2003.