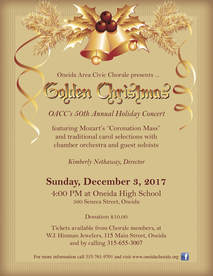 The Oneida Area Civic Chorale, a 105-voice community chorus based in Oneida, will present “Golden Christmas”, their 50th annual holiday concert, on Sunday, December 3, 2017 at 4:00 PM at Oneida High School, 560 Seneca St., Oneida.  The chorus will perform “Coronation Mass”, by W.A. Mozart, and a collection of traditional carols titled “Christmas Canticles”, by Benjamin Harlan.  The concert will be directed by Kimberly Nethaway of Rome, and accompanied by a 21-piece orchestra.  Joining the Chorale will be professional soloists Laura Enslin, soprano; Carolyn Weber, mezzo-soprano; Nathaniel McEwen, tenor, and David Kolb, baritone.

Soprano Laura Enslin is a soloist and recitalist based in Central New York. She has appeared with Symphoria and its predecessor, the Syracuse Symphony Orchestra,the Buffalo Philharmonic Orchestra, Syracuse Opera, Syracuse Friends of Chamber Music, and Syracuse University Oratorio Society, to name a few.   Her operatic and stage roles have included Gretel (Hansel and Gretel), Adel (Die Fledermaus), Dorine (Tartuffe), and Guinevere (Camelot). She made her Canadian debut in 2007, singing the title role of Molly Brant.  She performs with various local choirs, including those of St. Paul’s Episcopal Cathedral and DeWitt Community Church.  Laura last appeared with the Chorale in March, 2015, when she performed selections from the Great American Songbook.

Carolyn Weber, mezzo-soprano, last appeared with the Chorale in their 2015 performance of Vivaldi’s “Gloria”.  Most known in Central New York as an oratorio soloist, Carolyn has performed major works with several orchestras throughout the region, including the Clinton Symphony Orchestra, Symphoria and the former Syracuse Symphony Orchestra, as well as college and community choruses and church choirs, including the Hamilton College Community Chorus, Syracuse Chorale, DeWitt Community Church, and Fayetteville United Methodist Church. She has also sung principal roles in both opera and musical theater. Carolyn has been a member of the voice faculty at Syracuse University’s Setnor School of Music since 2005.   She was a choral and general music teacher in the Fayetteville-Manlius School District from 1983-1995, and after raising her three children returned to the district in 2013. Carolyn earned her Bachelor of Music Education in Choral and General Music from Indiana University in Bloomington, and her Master of Music in Vocal Performance from Syracuse University. She maintains a private voice studio in her DeWitt home where she lives with her husband.

Nathaniel McEwen, tenor, is a 2009 graduate of Vernon-Verona-Sherrill and an OACC Senior Scholarship winner.  He is currently a doctoral student in Vocal Performance and Literature at the Eastman School of Music. Since beginning his vocal training during his junior year at Cornell University, Nathaniel has participated in SongFest in Los Angeles, Si parla, si canta in Urbania, Italy, and has sung in masterclasses led by renowned soprano Renée Fleming and American composer Jake Heggie, among others. Nathaniel has sung as soloist in Cornell performances of Britten’s “Rejoice in the Lamb”, Rachmaninoff’s “All Night Vigil”, and Haydn’s “Harmoniemesse”, and performed selections from “Dichterliebe” at a concert for Cornell University donors in Alice Tully Hall at Lincoln Center.  Since his enrollment at Eastman, Nathaniel has been a tenor soloist with the Rochester Philharmonic and the Eastman School Symphony Orchestra. He made his operatic debut as the title role in Eastman Opera Theatre’s production of Britten’s “Albert Herring”, and while in Italy, made his international operatic debut as Gherardo in Puccini's “Gianni Schicchi”.

David Kolb, baritone, holds a Bachelor of Arts degree from Hamilton College with dual concentrations in mathematics and music, and has studied voice with Lauralyn Kolb and with Timothy LeFebvre. He has been a soloist for the Hamilton College and Community Masterworks Chorale, the Greater Utica Choral Society, the Mohawk Valley Choral Society, and the Catskill Choral Society. David currently is the Director of Music at First Presbyterian Church in Rome, as well as choral director and voice teacher at Utica College. He has also performed in many community theater productions, most recently as Enoch Snow in the Rome Summerstage production of “Carousel”. David resides in Utica.

Mozart’s Mass in C major was completed on March 23, 1779 in Salzburg, Austria.  It appears to have acquired the nickname “Coronation” at the Imperial court in Vienna in the early nineteenth century, after becoming the preferred music for royal and imperial coronations as well as services of thanksgiving.  Many have stated that the Coronation Mass is Mozart’s most famous religious work, and a testament to his musical creativity.

“Christmas Canticles”, by American composer Benjamin Harlan, is a 1996 work in which classic carols and beautiful new songs are woven together in four separate suites to create a work for the Advent, Christmas and Epiphany season.  The Chorale and soloists will perform Harlan’s entire work, which includes “Bring a Torch, Jeannette Isabella”, “Silent Night”, “The First Noel”, and “Angels We Have Heard on High”.

A 21-piece ​orchestra composed of area musicians will provide accompaniment for the concert.  The Orchestra Coordinator is Margaret Jevens from Rome.  Rehearsal piano accompanists are Bernadette VanValkenburg of Sherrill and Heather O’Connell of Oneida. 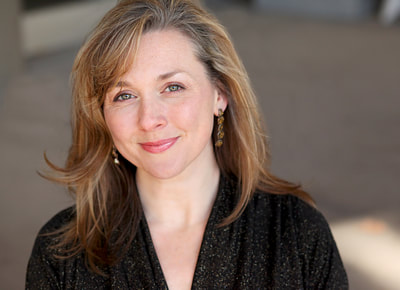 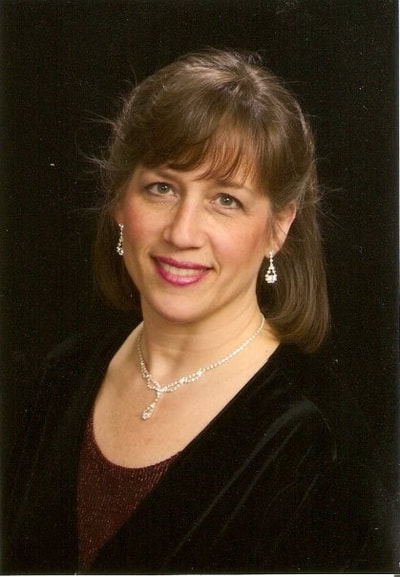 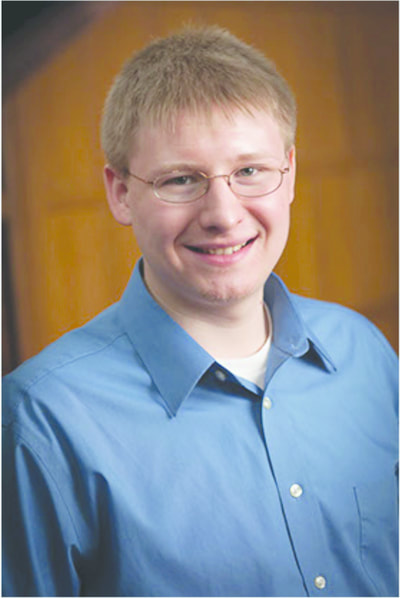 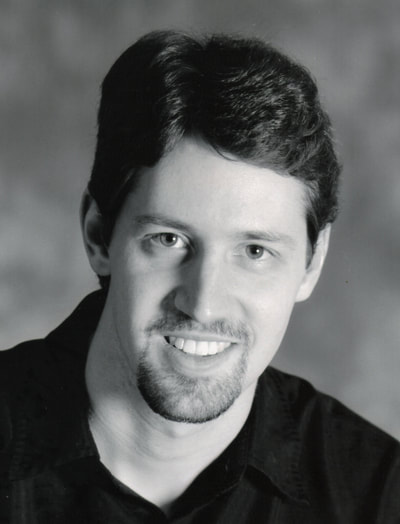