The Musical World of Disney
​May 2018 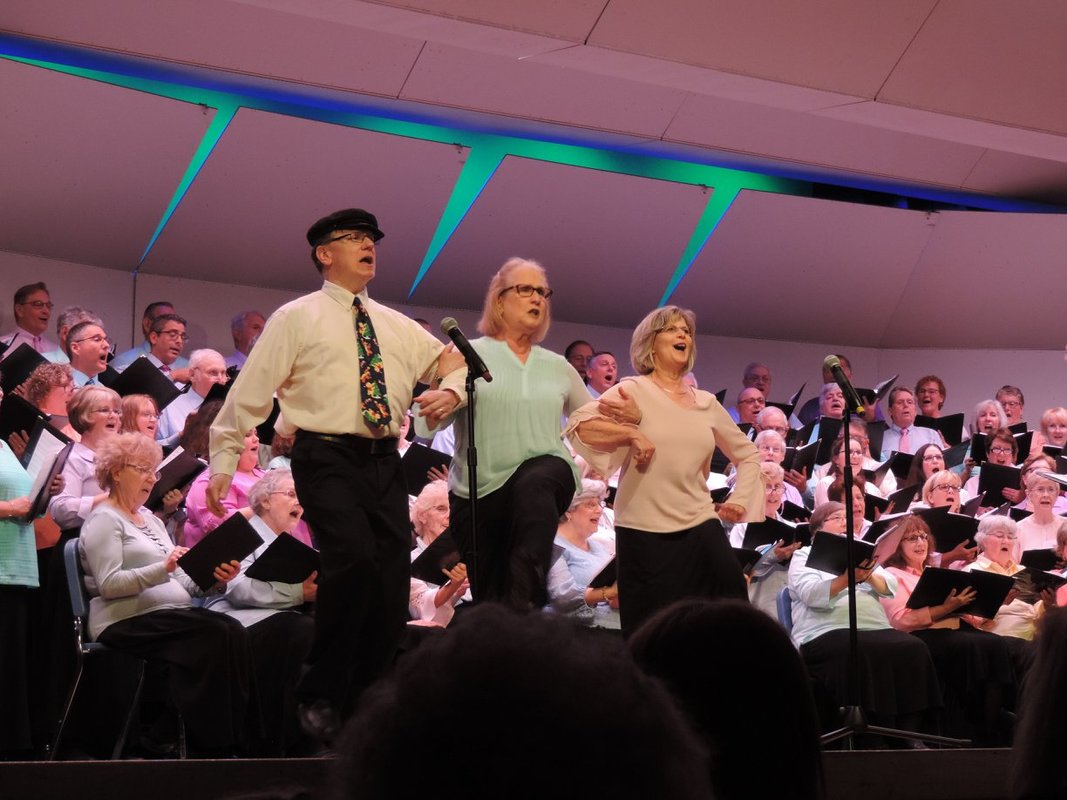 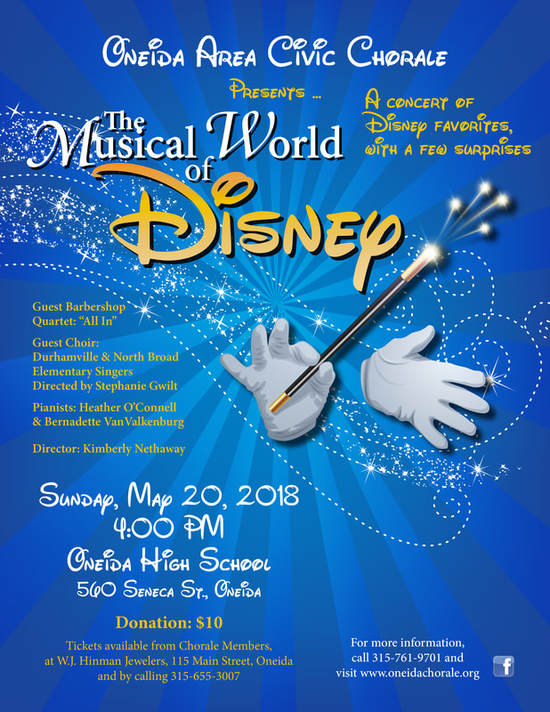 The Oneida Area Civic Chorale, a 105-voice non-audition community chorus,  will present “The Musical World of Disney” on Sunday, May 20, 2018 at 4:00 PM at Oneida High School, Seneca Street, Oneida.  The concert will feature the barbershop quartet All In,  the Durhamville and North Broad Elementary Singers, and several soloists from the Chorale.  Kimberly Nethaway of Rome will direct the concert, with piano accompaniment by Heather O’Connell of Oneida and Bernadette VanValkenburg of Sherrill, and Amanda Yeoman of Oneida on flute.

The all-Disney concert will begin with “The Musical World of Walt Disney”, a medley of 15 favorites from the past several decades arranged by Mac Huff.  The Chorale and narrators Roselle Lynch and Tari Peters will invite the audience to “Be Our Guest” and enjoy such classics as “Bibbidi-Bobbidi-Boo”, “Hakuna Matata”, “A Whole New World”, and “Winnie the Pooh”.  The Chorale will also perform "Circle of Life" from Lion King and "The Spirit of Adventure" from the Disney-Pixar film UP.

A 40-voice chorus of students from the North Broad Street and Durhamville Elementary Schools in Oneida will add to the Disney fun.  Under the direction of their music teacher, Stephanie Gwilt of Oneida Castle, they will sing “How Far I’ll Go”, from the movie Moana, “Theme from Spider Man”, and the Disney theme park standard “It’s a Small World”.

The Disney tunes will continue as the OACC welcomes All In, an award-winning barbershop quartet based in the Utica area.  Competing in the Seneca Land District of the Barbershop Harmony Society, All In formed in July, 2014, and won the Novice Quartet contest that fall. In the fall of 2017 they won the Seneca Land District Championship, and in April of this year they earned the right to represent their district in the Barbershop Harmony Society’s International Quartet Contest in Orlando, Florida, in July.  Chorale member Don Drake of West Winfield sings Baritone in the quartet.  Brian Sagrestano of New Hartford sings Lead, Evan Brooksby of Niskyuna is the Tenor, and singing Bass is Joel Barney of Syracuse.  At the concert, the quartet will perform barbershop-style renditions of “Zip-A-Dee Doo-Dah”, “Can You Feel the Love Tonight”, and “When You Wish Upon a Star”.

The concert will include solos by OACC singers Kathy Gay, John Nethaway, Sarah Terrell, Don Drake, Jim Baker, Sarah King, and Rob Wright.  In keeping with the inter-generational aspect of Disney music, Alyssa Knutti will perform with her young daughter, and John Stone, Michelle Fuller and George Winne will form an ensemble with youngsters from their own families.

The 2018 OACC Senior Scholarship recipient, Rebecca Matte of Rome, will also appear at the concert.  Matte, a senior at Rome Free Academy, will receive her scholarship and perform a vocal solo.  The audience will be invited to join in a Sing-a-Long of Disney tunes, and will be treated to several special appearances throughout the concert.

The student chorus and the Chorale will join to present the concert finale, “How Does a Moment Last Forever”, from Beauty and The Beast. 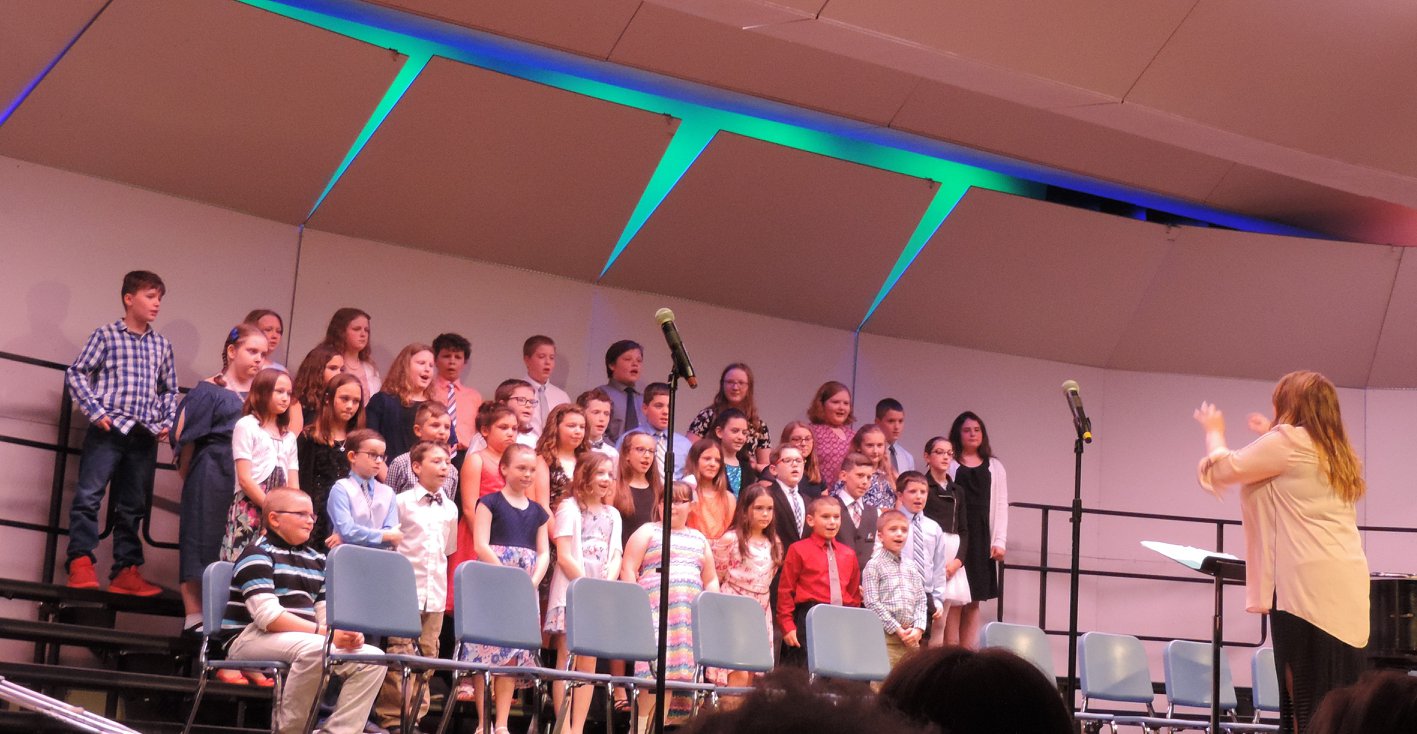