50TH ANNIVERSARY FUN FACT: The OACC got its start in the fall of 1967, when a group of St. John’s Episcopal Church of Oneida choir members asked their director, Daryl Wonderly, to lead a community chorus.  He agreed, and in December of that year he and 25 singers prepared a tape of Christmas music to be played on local radio station WMCR.  In May, 1968, he conducted 42 singers in the OACC’s first concert.  Wonderly continued as Director until 1995.  He was also a vocal music instructor with the Oneida City School District, and now lives in Arizona.

50TH ANNIVERSARY FUN FACT: The OACC has always been versatile: March 15, 1980 saw a concert centered on folk music with guest band Headin' South and several soloists...check out former Oneida Mayor Max Smith, and Don White, who continues to sing with the Chorale. The 1980 banquet was held at Casa Mia in Canastota...pictured are some long-time Chorale singers who are no longer with us.

The annual OACC Banquet was held June 5, 2017, at the Rusty Rail Banquet House in Canastota.  The 140 attendees had a great time reminiscing about the 50-years of the Chorale, enjoying excellent food and drink, and socializing with friends past and present.  Member Kitty Warner presented an ongoing slide presentation of OACC history, including pictures of concerts and events held since 1967.  The eight OACC scrapbooks, beautifully re-done by Historian Lillian Rossetti, were on display and enjoyed by all.  Chorale member Mark Maginn led a rousing session of OACC Trivia, and emcee Patricia Albaugh recognized past and present members for their participation in the group over the years.  Director Kimberly Nethaway addressed the group, and introduced Founding Director Daryl Wonderly, who gave some retrospective remarks.  Many thanks to organizers Jeannine Masucci, Kitty Warner and Patricia Albaugh for an excellent cap to the 2016-2017 season. ​
The 50th Anniversary of the OACC was celebrated in style on June 3-4, 2017, as hundreds of locals celebrated by singing with and listening to renowned composer Mr. Mark Hayes.  The OACC brought Mark to town as a Golden Anniversary gift to the community.  Concert audiences, church congregations, and student and adult choral singers have been singing and enjoying Mark Hayes original compositions and vocal arrangements for years, and to work with him and see him in person was a thrill for all.

​Mark conducted a community church choir of 55 singers at the very well-attended June 4 worship service at the First Presbyterian Church of Rome.  The choir performed four Hayes works, and Mark offered two outstanding piano solos.  Later that afternoon, the 105-singer OACC performed to a packed church, under the direction of Kimberly Nethaway and accompanied by Sam and Colleen Pellman and Bernadette VanValkenburg on piano and Amanda Yeoman on flute.  The audience of about 500 enjoyed a concert that included seven of Mark’s choral works, six of them conducted by the composer himself.  He accompanied another, and offered two piano solos of his arrangements.  A big favorite in the concert was Mark conducting the chorus on his arrangement of “The Erie Canal”.

The concert wasn’t all Mark Hayes, as it also featured the Founding Director of the Chorale, Mr. Darly Wonderly conducting one number.  Daryl and wife Jeanne made the trip from Tucson, AZ, so he could lead “Hallelujah, Amen”, a song sung in the first OACC spring concert in 1967.  Singers and audience members were thrilled to see Daryl and his family, and especially to see him at the front of the group once more.
Another highlight of the concert was the piece “How Can I keep from Singing” , by local composer Samuel Pellman.  The number, which was commissioned by the OACC, was accompanied by Sam and his wife, Colleen.  Director Kimberly Nethaway continues to lead the OACC in stellar fashion.  Her concept for the 50th Anniversary Celebration and her tireless efforts working with singers to produce high-quality choral performances are much appreciated by the entire Oneida-Rome-Utica area.

CHARTER MEMBERS HONORED
Four Charter Members of the Chorale were honored at the concerts on March 11 and 12.  From left:  Lillian Rossetti, Jackie Lottermoser, Sandy Aylesworth and Peter Dwyer, all of Oneida, have been singing with the group since its inception in 1967.   Bernadette VanValkenburg, of Sherrrill, first from right, was  also honored for being the group’s first accompanist, when she was still a high school student.  She has been Chorale accompanist for the past 22 years. 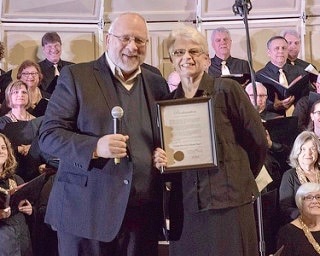 MAYORAL PROCLAMATION
Oneida Mayor Leo Matzke proclaimed March 11 and 12, 2017 to be “Oneida Area Civic Chorale Days” in the City of Oneida, and urged all citizens “to share in the joy of singing by community involvement in the choral arts.  Matzke attended the concerts at the Kallet Civic Center and made the proclamation in honor of the group’s 50th Anniversary Season.  The Chorale was founded in 1967 by Daryl Wonderly and a small group of singers from St. John’s Episcopal Church, and has been performing continually throughout the area. Kimberly Nethaway of Rome has been Chorale Director for the past 22 years.  Matzke is pictured presenting the proclamation to Chorale President Patricia Albaugh of Oneida.