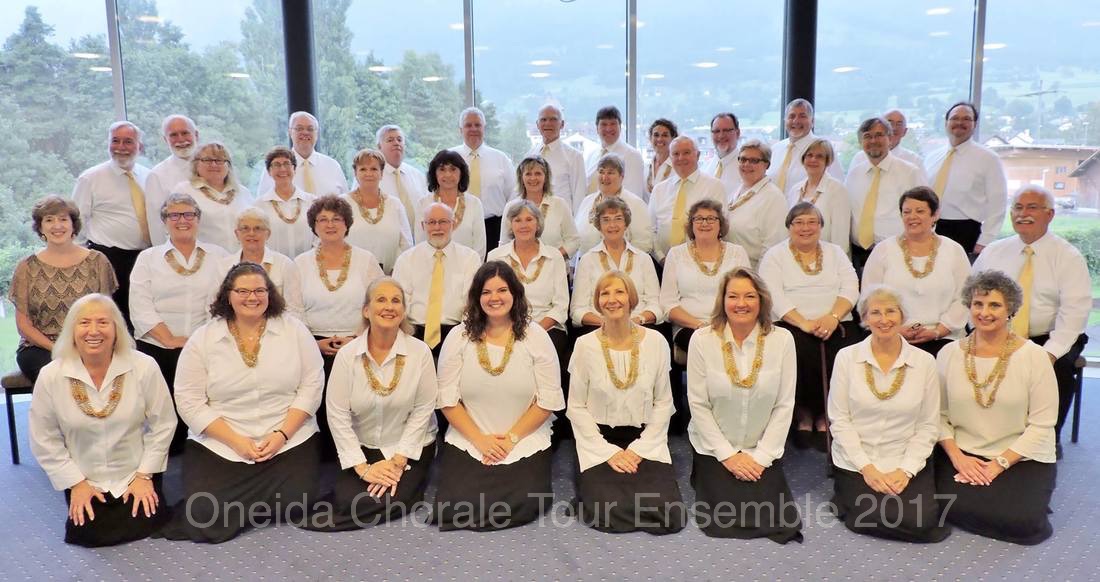 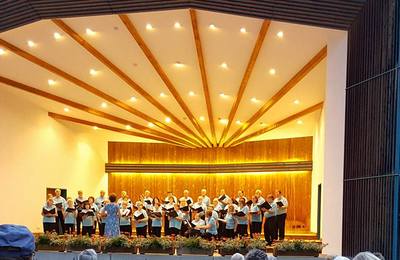 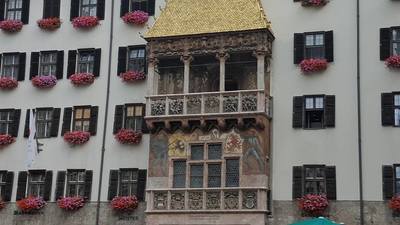 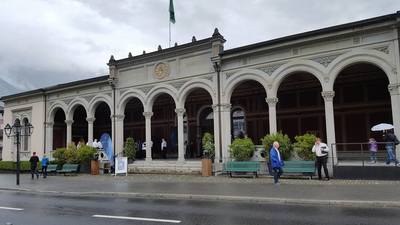 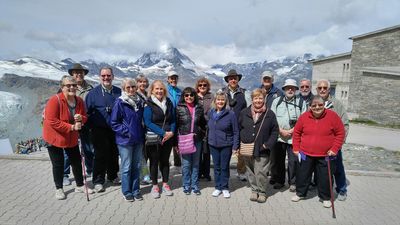 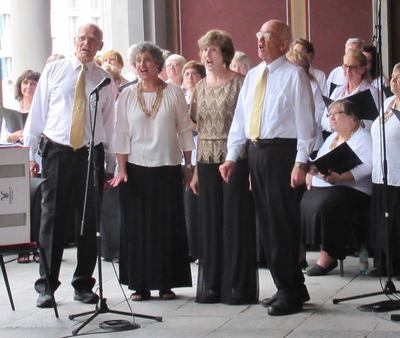 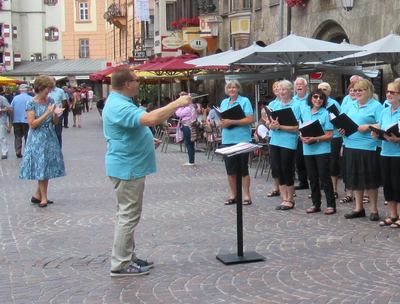 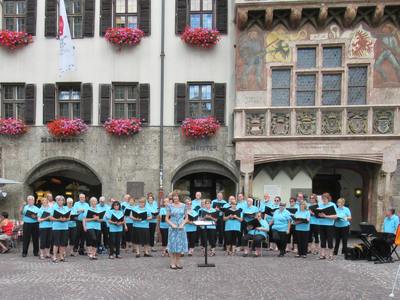 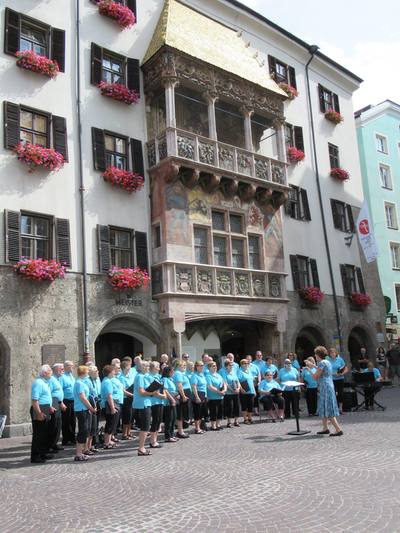 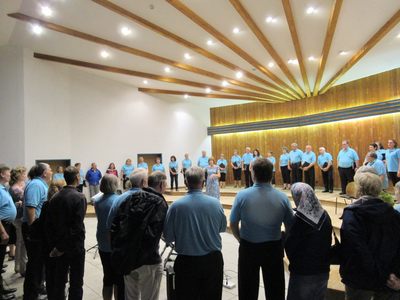 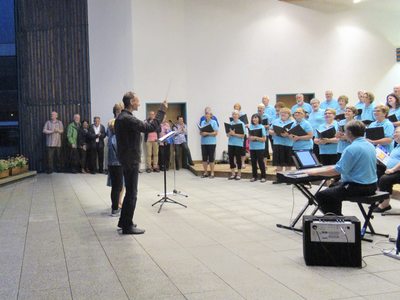 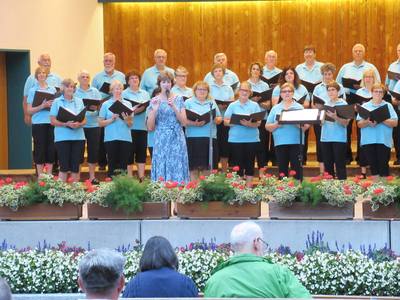 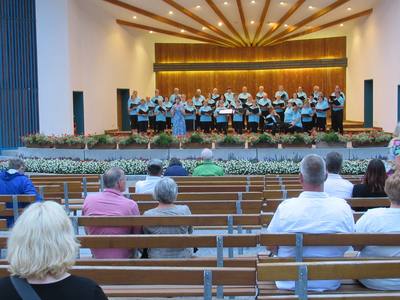 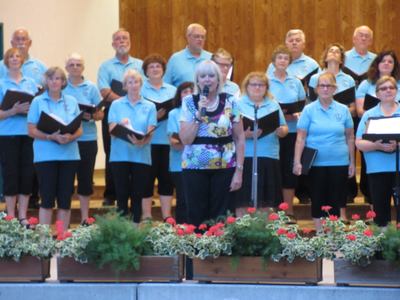 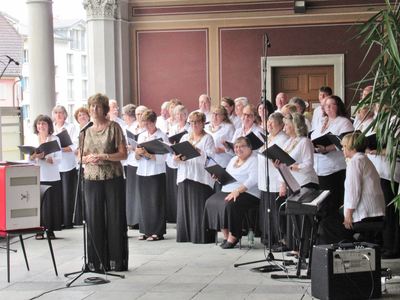 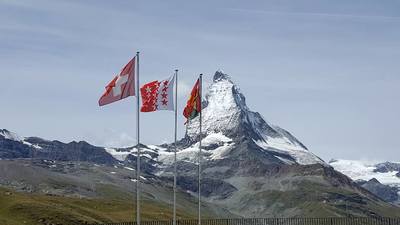 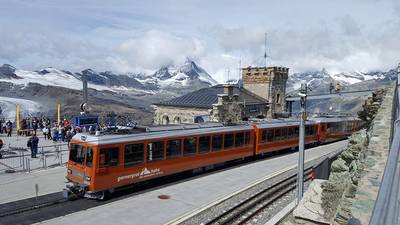 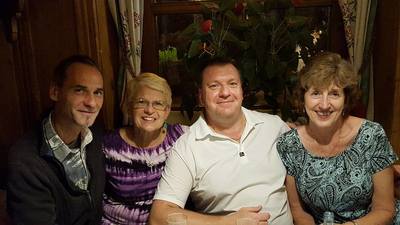 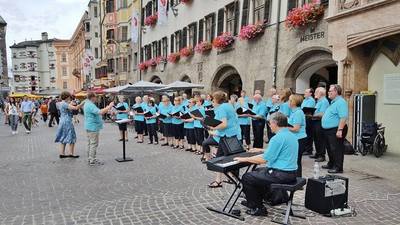 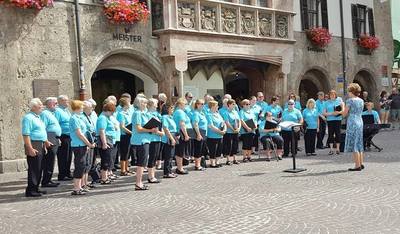 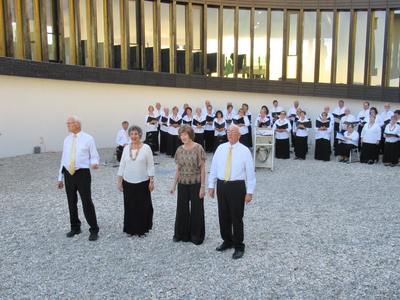 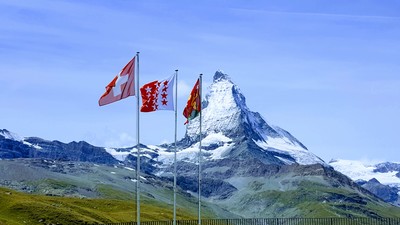 An Oneida Area Civic Chorale tour ensemble recently returned from an eleven day European tour. Chorale Director Kim Nethaway, of Rome, led the group of 45 singers and friends from Central New York as they toured and performed four outdoor concerts in the Bavarian and Tyrolean areas of Germany, Austria, and Switzerland. The group traveled under the auspices of American Music Abroad, a company from New Jersey that has been producing singing tours for students and adults since 1975.  The tour repertoire was a mix of American music, including “Amazing Grace”, “Alexander’s Ragtime Band”,  “I’ve Got Rhythm”,  “Bless the Broken Road”,  “Swingin’ Wtih the Saints”, and two New York songs, “Erie Canal” and “New York State of Mind”.  Prior to departure,  the ensemble held a kick-off concert for friends and family at the First Presbyterian Church of Rome to prepare for the tour.

After flying into Zurich, Switzerland from New York’s JFK airport, the group boarded their motor coach with their Belgian tour escort, Nadine Vandenaweele.  Mrs. Vandenaweele has been the Chorale tour escort for several trips and has an excellent knowledge of the history and sights of the various cities and towns on the tour.

The first two nights were spent in Dinkelsbuhl, Germany, a 10th century village fortified by walls and a moat and located along the famous Romantic Road.  The daytime was spent exploring the enchanting town, with its cobblestone streets and quaint houses with their bright flower boxes.  A local guide provided much background on the village’s history.  The group’s first concert was at the Limeseum, just outside of Dinkelsbuhl, a very modern looking museum dedicated to various aspects of Roman life on the frontier, including the history of a Roman fort.  As the final song, “Bridge Over Troubled Water” was performed, a light rain began to fall.  By the end of the song, the rain had stopped and the audience and Chorale were treated to a double rainbow, making a rather auspicious start to the tour.
​
The next day the group headed to Mayrhofen, Austria.  Enroute they enjoyed a brief lunch stop in the old town area of Munich, visiting the Marienplatz and the famous glockenspiel.  While in Mayrhofen, the Chorale visited the Hintertux Glacier and enjoyed riding a gondola and watching skiers navigate the slope.  That night’s concert was located in a band shell, with bench seating for the audience.  As the concert progressed, a thunderstorm rolled in.  Since the stage was quite large, Mrs. Nethaway invited the hearty members of the audience to join the chorale onstage to finish the concert.  “Our tours have made us stronger and more flexible musicians, as we have to adapt to all kinds of venues and performance conditions,” says Mrs. Nethaway.

The following day, the group moved on to Innsbruck, Austria, site of two Winter Olympic games.  On arrival, the group headed to the old town area for a morning concert at the Golden Roof, a favorite meeting point.  The afternoon brought a visit to the Swarovski Crystal World, a magical experience showcasing the artistic beauty of crystals.  The next day started with a guided tour of  “Old Town Innsbruck”, followed by a trip to Oberammergau, Germany, home of the famous Passion Play, and a visit to Schloss Linderhof, one of the three castles of  “Mad” King Ludwig of Bavaria.

Rounding out the tour, the group headed next to Switzerland.  It was a rainy day and good for traveling on the motor coach.  Enroute, the group passed briefly through the tiny country of Lichtenstein, before arriving in the spa town of Bad Ragaz, known for its thermal waters and spa amenities.  The evening concert took place on the portico of the tourist office and even though the evening was cool and rainy, a good size crowd gathered under the portico to listen.  The following day, the group traveled to the nearby town of Chur, known as the location for the children’s story, “Heidi”, written by Johanna Spyri.  There they boarded the Glacier Express for a two and a half hour train ride through the Swiss countryside.  At the end of the train ride, they re-boarded the motor coach for the drive to Zermatt.  Enroute they needed to traverse the Furka Pass, a high mountain pass in the Swiss Alps.  The road is a narrow two lane highway with many switch backs to achieve the climb to the nearly 8000 foot pass, and was immortalized by the Aston DB5/Ford Mustang car chase in the James Bond movie “Goldfinger“.  It was clearly the most nerve-wracking event of the trip.

Arriving in  Zermatt, the group was greeted by their first look at the famous Matterhorn mountain.   The next morning, they boarded the Gornergratbahn, an electric and cog railway that climbs to the 10, 132 foot level of the Gornergrat mountain.  From there is a fantastic vista of 29 peaks over 13,000 feet, including the Matterhorn, as well as several glaciers.   The group had the opportunity to perform a spontaneous concert of three songs while overlooking the Matterhorn, much to the surprise and delight of the other tourists.  All of the group agree that time spent at the  Matterhorn was the highlight of the tour.

The trip concluded with the drive to Zurich, passing by Lake Geneva, the Gruyere area, famous for its cheese, and Bern, the capital of Switzerland.  A short time spent in Old Town Zurich, along the beautiful Lake Zurich, segued to the final dinner party, where the ensemble commemorated the trip with song and humor, and maybe a little nostalgia.

When asked to comment on the trip,  Jeannine Masucci of Canastota, who has been on all but one of the Chorale European tours, said she really liked the smaller towns and villages, where it felt safer and easier to navigate, compared to the bigger cities, like Munich.  First time travelers Don and Jody Drake of West Winfield were amazed at the sights, and enjoyed the people they traveled with, including the intrepid motor coach driver, Christian, who grew up in the Alps and navigated the narrow, switchback roads as easily as the major motorways.  They also stated that singing “Amazing Grace” in each country gave the song new meaning for them.  The youngest member of the group, Jenelle Yeoman of Gouverneur, enjoyed her second tour with American Music Abroad, having toured with a high school group in 2011.  She has since become a music educator and hopes to one day lead a group of her own on an AMA tour.  It was a treat for all to be able to mingle with the audience members after each concert, many of whom spoke English, and to promote goodwill between the Europeans and Americans through beautiful music.  Director Nethaway summarized, “The friendships formed among the choristers as they travel together create strong bonds within the Chorale long after we return home. Music has afforded all of us a remarkable means of communication.  What a gift it is to be able to express the human spirit in song!”

This was the eighth AMA European Tour for the Oneida Chorale.  The tours began in 2003 and to date have included visits to 14 countries.
​
​Becky Prior Ewen